And That’s a Wrap-Summer of Reset 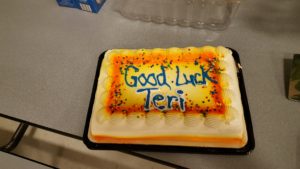 For the past nine years I’ve worked at an afterschool program called Common Ground Extended Care. In that capacity I was a teacher, the head teacher and then last year, stepped back down to teacher again. We had 60 k-5th grade kids and the idea was to create a program that challenged the older kids while not boring the younger ones and vice versa. Through the years I hugged, taught, wiped up spills, read to, bandaged, counseled, reprimanded, played with and cooked for hundreds of children, (I did a cooking show called Cooking with Teri in which I would cook foods from around the world while giving a lesson). I booked numerous guests to come in and give presentations that went with our theme. We’ve had Shakespearean actors, history reenactors, soap-makers, candle-makers, bee-keepers, quilters, scientists, inventors, car buffs, city planners, biologists, scuba divers, cloggers,  jazz dancers, conservationists, puppeteers, numerous artists and authors, and the odd Dairy Princess or two.

We had musicians and bands of all kinds including a ragtime duo, a nationally known blues guitarist, a band specializing in ancient instruments, a blue grass fiddler, a saxophonist and a didgeridoo player who gave us a full blown concert with sound effects, loops and everything. Our kids got to dress up in bee suits and scuba suits, watch a salmon being dissected, throw a lasso, sit in vintage cars, make Lego robotics,  hold a human brain, dress up in traditional Budapest costumes, learn how to dance the tango, make gnocchi and that wasn’t even the half of it.

In all my excitement in my new job, I pushed away the sadness of leaving a job that I love with the best co-workers and the best boss I could imagine having. I cried on and off all day yesterday and there were a few children it just gutted me to say goodbye to. I got flowers and gifts and homemade cards with childish embellishments. I received sincere, heartfelt thank yous from parents whose children I have taught for years.  I’m excited for the new chapter in my life, but it will never be able to replace the old chapter in my heart.

“Every new beginning comes from some other beginning’s end.”