And Then There Were Two

I’ve blogged about Halie before. Sahalie May was named after a waterfall and she was going to be our adventure dog. She was incredibly easy to train, responsive to the point of having some scary intuition and eager to please. A pibble cross, Halie exceeded our expectations as to what a joy a well-trained dog could be. She and my granddaughter became the best of friends. She’s completely in love with a cat. The only fly in the ointment was that she hates the car. Like it gave her such a sad to ride in it that we avoided taking her places, which was fine with her. She loves being in the woods and loves swimming, but getting her there broke our hearts. After a summer of going back and forth to the Powder House, she was better, but still disgruntled about the whole thing. Our lives were full of canine and cats until all of a sudden, I got the puppy bug.

Wyatt comes from a ranch in Eastern Oregon. I’m a big believer in rescue dogs and Halie came from a shelter as a puppy. But I set eyes on Wyatt and I knew he was supposed to be my dog. We paid the down payment and I impatiently waited until Christmas to pick him up. We left on Christmas day in a rainstorm that soon turned to blizzard conditions in the Columbia River gorge. There wasn’t a lot of traffic but the conditions were treacherous. “We must get the spud!” became our mantra. It took us over six hours to drive 300 miles.

One night in our funny old house on the high desert and Wyatt was ours. Small, fragile, not quite eight weeks. He stole our hearts immediately. But what about our first love? How would she react to a puppy?

I think ambivalent would be the best way to put it. Was it a toy? Prey? A horrible mistake? It couldn’t possibly be a dog, could it? I saw all of these things running through her mind. All the signs of stress were apparent… her expressive eyes were wide, she drooled excessively. By turns she was playful or  terrified.

The next morning was better. She only drooled on occasion and often took the play with me doggy posture—butt up, tail wagging, ears high and alert. Then she’d growl if he came to close to one of her favorite toys. Like a big sister, she was confused, jealous and interested. Here is a picture of my youngest granddaughter meeting her baby brother for the first time. See the look? That’s how Halie looks right now. 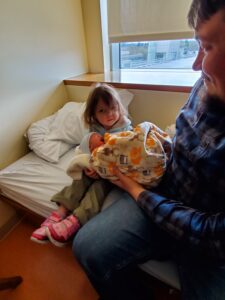 Three days in and things are getting better. She wants to play with him, but isn’t sure how. He’s too small and her normal doggy play tactics are far too rough and it’s like she knows it. For his part, Wyatt has no such qualms. He weaves in and out of her legs, nipping at her hocks, leaping for her ears. She is remarkably patient considering. 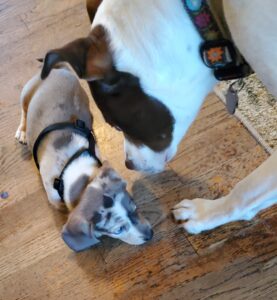 Training is also going well. I am sleeping with him in the extra bedroom so I can get him up to potty on his pee pad regularly. We are kennel training him, but don’t believe in letting the baby cry it out… we didn’t do that with our children, and don’t do it with dogs. currently, he goes in and out of his kennel at will. We want it to be a safe haven for him and you can’t do that by locking him in. He’s pretty much confined him to the extra bedroom unless I am keeping direct eyes on him. Zac George is one of the best trainers out there and I used his non-dominant methods with Halie. Dogs have been bred for thousands of years to work with humans—it’s just a matter of learning to communicate with them.

I must be doing something right, because Wyatt is well on his way to learning both coming when called and how to fetch. “Look” is going to take more time, but considering that he is just eight weeks old today, I think we are doing very well. Fetch is important because it’s an easy way to wear out the puppy and a tired puppy is a good puppy!

In other news, I managed to get most of Christmas put away—no easy feat with a puppy underfoot. One of the advantages of having a small tree and minimal decorations this year, I suppose. I also cleaned out all the leftovers, made out this week’s menu and grocery list and worked a full eight hours-with a baby cradled in one arm. ! Now if I could just get a shower…