Before I get to Born of Deception, I wish to say that I’ve been blessed that the reviews for Born of Illusion have been  overwhelmingly positive. I’m always happy when people truly GET the book…even to those little nuances that I thought were just for me. And one little thing:  the mother daughter relationship in this book is very, very complex. It isn’t SUPPOSED to be a relationship of mutual happy support or the book would be SO MUCH LESS than what it is. There, with that said, I will get to the real post which is the cover copy for Born of Illusion and address an abiding rumor…

Budding illusionist Anna Van Housen is on top of the world: after scoring a spot on a prestigious European vaudeville tour, she has moved to London to chase her dream and to join an underground society for people like her with psychic abilities. Along with her handsome beau, Cole Archer, Anna is prepared to take the city by storm.

But when Anna arrives in London, she finds the group in turmoil. Sensitives are disappearing and, without a suspect, the group’s members are turning on one another. Could the kidnapper be someone within the society itself—or has the nefarious Dr. Boyle followed them to London?

As Cole and Anna begin to unravel the case and secrets about the society are revealed, they find themselves at odds, their plans for romance in London having vanished. Her life in danger and her relationship fizzling, can Anna find a way to track down the killer before he makes her his next victim—or will she have to pay the ultimate price for her powers?

I am SO excited about this book. It is MUCH, much darker than Born of Illusion, which was so much fun to write…

Now the rumor… When I queried Born of Illusion, my idea was to have each story  told from the view point of a different illegitimate daughter. Houdini first, Rasputin Second and then a prequel of Jack the Rippers daughter. When I sold the book, my editor loved Anna Van Housen so much that she wanted the second book told from Anna’s POV.  I agreed. So the second book doesn’t feature Rasputin, but Aleister Crowley and Harry Price are both in Born of Deception.  That would have been the end of it except that almost every single  review of BOI includes the Rasputin rumor!

I have the Rasputin book in my head and would love to do one with him soon. The reason the rumor got out? Somehow the original query that  I used in looking for a new agent ended up on Goodreads… I have NO idea how that happened.  I will keep everyone posted about the Rasputin book. Here are some pix of the next two gentlemen in the book…You can read more about these too men here and here.  Both are VERY HIGH ON THE CREEP FACTOR SCALE. They are part of the reason that Born of Deception is so much darker than Born of Illusion. 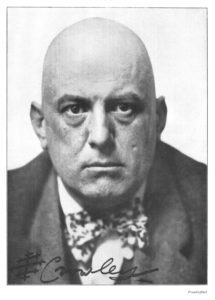