I’ve blogged about my apathy toward the holidays this year—It’s different. It’s different for all of us. So this weekend I made a concerted effort to do the things that usually encourage the Christmas spirit.

No one can say I’m not trying.

I knew I wanted to get the Christmas decorations out of the attic and put up a tree this weekend, but like everything else in life, certain things had to happen first. In order to put a tree in the back of the truck, we had to go to the yard debris and get the leaves out of the back. But if we were going to do that, we first needed to finish cutting the perennials, pick up the last of the leaves, etc., so we spent two hours doing yard work before heading to the yard debris. We then stopped on the way back to pick up the tree, but the tree lot had no good ones, we only had one mask and the subpar trees were 70.00 bucks. No, thank you.

After a quick lunch, we ran out to the country to find a farm and  discovered one we hadn’t been to before. The trees were fairly unkept, and after much dithering, we found one we both agreed on. Of course, the trunk was buried in mud and in a very Christmas Vacation moment, we borrowed a shovel from the deeply suspicious Christmas tree farmer and dug it out enough so we wouldn’t lose the bottom part of the tree.

We may have scored the tree, but the chores weren’t done because in order to get the decorations down, we had to reorganize the garage. We filled the jeep up with stuff going to the powder house and loaded my car up with stuff earmarked for Goodwill. Only then could we get the Christmas boxes down and since we were doing that, we might as well put the summer stuff away, so up went the fans and the cushions for the patio furniture and various and sundry other items that won’t be used until it’s warm again.

While all this was going on, I cleaned a bunch of veggies and put them out for mom to chop. I was dying to make soup out of the broth I had made. Once everything was down from the attic, I threw the soup together and then helped hubby put the tree up and decorate it. It was enjoyable and sort of sad at the same time. I was very conscious of past Christmases and the people missing from our lives… my dad, both of Alan’s parents, grandparents, etc. I am so honored to have my mom with me still. We put the plastic angel from my childhood on top of the tree, which deeply touched her. I found my children’s Christmas stockings and almost cried because I miss them so much… yes, they’re still alive and well, but I miss the babies they were… we had so much fun with them!

The soup turned out great, but the bone broth wasn’t as deep as I would have liked. I am going to try it again with a slow cooker, so I can leave it in for at least 15 hours.

Sunday was mostly running around. I planned my weekly menu, made my grocery list early and was at the grocery store at 8am to avoid the crush… Crowds during a pandemic seem counterintuitive to me. Then in quick succession, hubby and I finished up the shopping, dropped the stuff off at Goodwill and made a trip to John’s market (a specialty beer and wine shop) to pick up a gift. It was great to see so many people wearing masks and protocols being followed. Made me feel a bit safer, though Oregon’s numbers are still rising.

After returning home, Hubby retired out to organize the garage and I mixed up the dried fruit for the black fruit cake and put them in a jar to soak in rum. I’ll leave them there for a couple of days before mixing the cake later in the week. 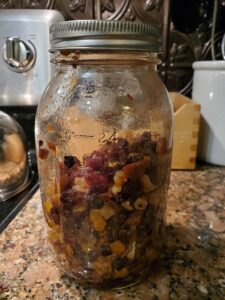 Then I made a walnut olive oil cake…admittedly, my baking skills are a mixed bag (See my post about my disastrous pumpkin bread), but this cake turned out spectacularly. The cake is made from equal parts ground walnuts and flour and the extra virgin olive oil makes it super moist and rich. It’s served with a spicy orange syrup, a dollop of crème fraiche and pomegranate. It turned out so lovely that I immediately ran some over to the neighbors.

A really nice capper to a really busy weekend that was lovely and nostalgic and a bit sad. Things are not the same and I am trying to dig deep to court the meaning of the season without sliding into an abject depression about how different everything is. I remind myself that different isn’t necessarily bad. It’s just different. The pandemic is bad. Our political climate is bad. The holidays are just a blip in the bigger picture and that’s how I have to approach them.