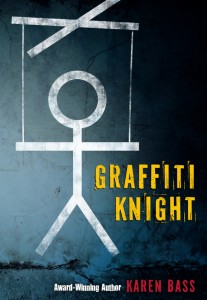 In a market flooded with dystopian novels, award-winning author Karen Bass brings readers a fast-paced story about a real-world era of censorship and struggle too often forgotten by history: Soviet-controlled post-World War II East Germany, where one boy fights for self-expression and the freedom to build his own future.

Speaking out in East Germany is forbidden, but sixteen-year-old Wilm has found his voice. At night he wages a graffiti campaign against the police, who answer to the Soviet Army that controls the country. “Marionetten,” he writes—puppets. And Wilm’s war of embarrassment feels good. It feels powerful. If only Wilm can keep that power he won’t ever end up weak like his father. And he won’t ever stand by and let Soviets—or anyone—hurt his sister again.

But to keep his newfound power Wilm has to become more and more like his adversaries. And when he crosses one line too many, the victims may be the very people Wilm wants most to protect.

Pick up a copy!