I’ve spent the last couple of years watching Food Network and teaching myself to cook. Like I’ve written in other posts, now that writing is my job, cooking is my creative outlet. I have tackled souffles, crepes, beef Bourguignon, polenta, risotto and other challenging recipes. I now cook confidently with wine, fresh herbs and spices and a host of ingredients I have never tried before. I often go off the grid and create my own recipes. Because of my love of cooking with fresh ingredients, I even put in my own garden last year.

As many of you know, I was diagnosed with throat cancer and lost 45 pounds over the course of treatment. My taste buds died and it took a while for them to come back, but when they did, they returned with a vengeance. I have now officially gained all the weight I lost…which isn’t necessarily a good thing because I was about 30 pounds overweight to begin with!

So I have started working out and have resolved to concentrate my considerable culinary talents on healthy cooking. Not that I’ll be substituting cream and real butter with fakes… I just won’t be using them as often. More vegetables, less cheese. Use fresh food in season, that sort of thing. I’ve had cancer twice… eating right is pretty high on my priority list and besides, cooking  is my happy place. 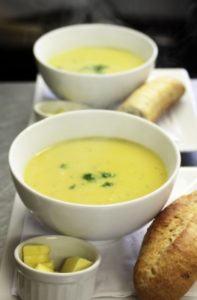 So here’s tonight’s recipe only I plan on modifying it…I canned my own corn and my own tomatoes, so I’m using them instead of store bought. I’m also substituting one of the regular potatoes for a sweet potato to increase the nutritional content. I ‘ll be ditching the Gruyere cheese in favor of some Parmesan and just sprinkling some croutons on top. You can also view the original recipe on the Food Network.

Preheat oven to broil. Slice baguette into twelve slices. Brush each side with olive oil. Broil croutons for one minute on each side until golden brown. Remove from oven and rub one side with garlic clove. Set aside.

Divide vegetables among crocks. Top with two croutons. Add enough broth to come to the top of crock. Cover top of crock with grated cheese.

Place crocks on baking sheet and bake for 12 to 15 minutes or until cheese is browned and bubbling.