My husband is a packrat. He’s a lethal combination of sentimental and materialistic. I get it to a certain extent. His family didn’t have a lot of money and there were a lot of things he wanted but didn’t get.

He has them now.

He worked incredibly hard and to buy himself all the things he always wanted. In triplicate. At last count he had fifty-five fishing rods, seven guitars and multiple pairs of waders, etc. The list goes on. He likes to collect things. It makes him happy. He saves cards, notes, brochures, maps, you name it.

I let a card sit on my desk for a week and then toss it. I think I have five that I kept. I go through my clothes three or four times a year and give to Goodwill. He keeps the same shirt until it’s a rag. Then he keeps that. My love is also a piler. He has a table in his garage where he separates his papers and keeps them. I shove my papers in a file and go through the files every year or so. He likes everything to be out in the open so he can see it. I like everything put away. Out of sight, out of mind. So much so that I’ve actually put stuff away and never saw it again.

We have a lot of conflict over stuff. 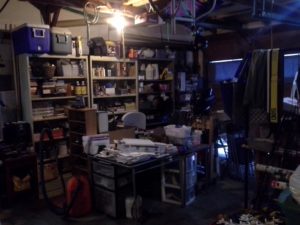 We’ve kind of called a working truce. He leaves stuff lying around the house and I take it all and dump it on his workbench in the garage. The garage is his. If he wants to hold on to something bad enough he can find a place for it out there.

This year, I moved my office from the dining room to my son’s old bedroom and it created a ripple of change throughout the house. I want everything to be uncluttered and pristine. I want my kitchen counters to be clean and my tables to be cleared. I’ve been going through each room, little by little and cleaning and tossing.

I even cleaned my cleaning supplies. I couldn’t believe how many items could be tossed. Cans that only had maybe a squirt of product left in them. Sponges that were way past their prime. Stuff in unmarked spray bottles whose contents were a mystery. It said Fabreeze, but it smelled like bug spray to me. Out, out, out!

I went through my bathroom and tossed things that we never used. Bottles of old lady smelling lotion. Odd bubble bath stuff that came in gifts… I rarely take baths and they’re mostly Epsom salt baths for sore muscles—I don’t need an exploding bath cupcake for that. And my husband’s stash of hotel soap. Some were so old they were yellow on the edges. Out, out, out!

I wish I’d taken a before and after of my bathroom shelves. Mind you, these shelves are open for everyone to see and we had our pet supplies next to medicine supplies and everything was stuck in cardboard boxes. I splurged on a set of fabric totes and separated things out. I really wanted to buy some pretty new towels to go with it, but have you seen the price of towels? So I just ignore the towels and concentrate on the totes.

I like a clean house, so I make lists and more lists to help me keep it that way. In an ideal world, I’d have a house keeper, but barring that, I work the list. Here are a few sites that have helped me declutter my house and keep it tidy.

If not my husband’s garage.