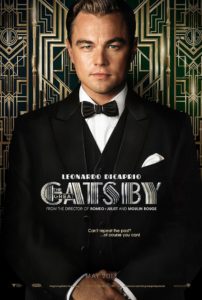 As someone who writes books set in the twenties, I was incredibly excited to see The Great Gatsby. Now let me quantify this by admitting upfront that I don’t think Fitzgerald’s book is the last word in great American novels. I wasn’t a huge fan of the story. I am however a screaming, raving devotee of the writing. The words of The Great Gatsby thrill me to my ever-loving, word geeky soul. So I had kind of a love/meh relationship with the book. I’ve read it at least five times, so what does that tell you? Conflicted much?

I felt the same way about the movie.

On one hand, the cinematography was lush and gorgeous, the acting superb. On the other, the style of the filming, the narrator, the music and the over the top feel of the movie took me aback. I was bewildered and I don’t go to movies for bewilderment. I go for enjoyment and it’s hard to enjoy something when you’re all WTF?

You know those in-between parts in a musical, where you’re just waiting for the cast to break out in song? The Great Gatsby felt just like that only the musical numbers never came.

It didn’t help that I was watching it with someone who ended up LOATHING the film, so my enjoyment of those parts that were noteworthy were a bit diminished. After watching it, I met the girlfriend of a young friend who just loved it. She was nineteen. My daughter thought it was phenomenal. She is twenty-two. I  find it extremely interesting that young people adore it. Maybe that was the point?

Perhaps that is why I wasn’t fully on board with the production. Even though I write YA, I am most decidedly NOT a young adult, or even a new adult.  The movie’s slick MTV style threw me because I was expecting movie realism rather than an excessive interpretation of the era of art deco and jazz, (the absence of which actually pissed me off, jazz lover that I am.)

But isn’t excessive opulence what the jazz era and The Great Gatsby was all about?

So I am going again. I am going with a different mindset to watch a movie that just might be an accurate representation of a book I love… even though, you know, I really don’t. But I do.

If you know what I mean.

Have you seen the movie yet?